FOR more than a decade, the acrimonious relationship between leading mobile network operator Econet Wireless and the ZANU-PF government has been vivid and clear as crystal.

Lest we forget, it is the same ZANU-PF that worked tirelessly to block Econet from attaining its operating license in 1998 after heated court battles between the two parties.

However, if recent developments are anything to go by, Zimbabwe should brace herself for a new ZANU-PF with a rather softened approach towards Econet.

ZANU-PF’s Political Commissar, Cde Saviour Kasukuwere  took to his micro-blogging account to speak against Kwese’s license denial and called on government to reconsider their decision. Despite having attacked Kwese, Prof Jonathan Moyo a top government official also took a swipe at ZBC and heaped praises on Kwese.

It has become evident that Zimbabweans have a dire appetite for affordable and worthy watching Television Programming. Even Prof Moyo hinted that ZBC’s programming was below standard.

Be that as it may,  the Kwese deal must be revisited and the company should at least be awarded even a content distribution licence. This company is highly financially capable to pay any amount government asks for.

Kwese TV provides an alternative for most Zimbabweans to access good programming at affordable rates. Instead of chasing them away, government should license Kwese and just ensure it complies by the country’s indigenisation and economic empowerment laws.

In the process, Kwese is better positioned to directly contribute to the economy as well as create local jobs for thousands of jobless Zimbabweans. 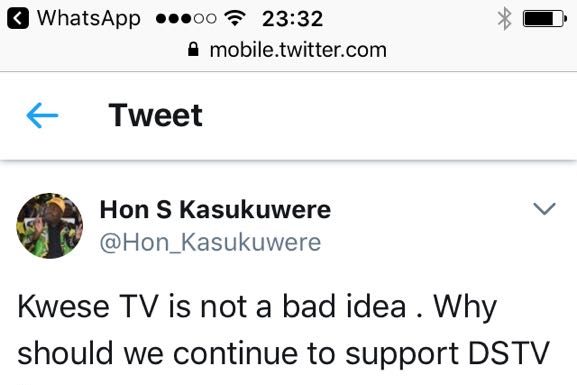 There is nothing much to fear in Licensing Kwese as its sole business in Zimbabwe will just be that of distributing content just like its doing in other countries. Just like Multichoice, Kwese deserves a chance to prove itself a worthy rival in content distribution, maybe this could actually work as a wake-up call to DSTV’s programming which is comprised of old films and repeats.

It is however mind boggling to note that even at a time  when almost every neighboring country to Zimbabwe has accepted Kwese in the territory, Zimbabwe remains the odd one out and still has its doors shut against Kwese.

The irony of it all is that Kwese is owned by Zimbabwean business mogul Strive Masiyiwa but still, Zimbabwe acts as if they are dealing with a total stranger.