The Zimbabwean Government recently commissioned and celebrated the National  Data Center (NDC),  a platform  that  is meant  to serve  the nation with  platform as  service, (PaaS) storage as  a service (SaaS) and cloud  computing services for government  operations.

The choice for this partnership was none other than Inspur, a Chinese base giant  in server  deployment and currently the world’s third largest server provider.

President Mnangagwa said infrastructure such as the National Data Centre and the Zimbabwe High Performance Computing Centre established at the University of Zimbabwe, would go a long way towards capacitating institutions on adaptation of all sectors of the economy in line with the fourth industrial revolution.

Some experts   have wondered  if we are ready  to utilize this  million dollar investment, at the time government  has failed to run  basic ministry websites, online  company registrations,   online passport  applications and basic  services,  yet the local  servers are already  under utilized.

“This  is another  SIRDC and  High Performance  Computing Centre  to become a white  elephant, all we  do is to procure and never  utilise” said  an analyst

Other  experts however  have  argued , insisting that this was the best  deal in  terms of scalability and  thinking  with the future  in mind towards  data processing,  core location, and very  fast and  efficient  systems to manage  big  data, with the  advent of smart cities and safe cities in Harare, there  was no substitute

The   question remains, do  we need such  a huge  data  centre,  how are we  intending to utilize it,  how  much  of privacy and secrecy act will it not contravene and  more  importantly how much  did  it cost us and  the maintenance  and licence  issues in  future

On April 18, 2006, Inspur changed its English name from Langchao to Inspur, in a move intended to open up the international markets.

US Department of Defense names Huawei and Inspur in list of Chinese military-linked companies.

This was not the first time for the Zimbabwean  government to work with this Chinese  company,  some years ago Chief Secretary to the  president  Misheck Sibanda led  a delagation to China on   fact finding mission and to clinch  government deals.

This  led to the birth of a huge Zimra  scandal which  saw Geshem Pasi quoting three times  the price, a matter  he is still appearing before the courts to answer

Through its parent company Welkin Import and Export, Righlux Services signed a $11 819 000 contract with Inspur Global for the supply, delivery and installation of hardware, equipment and software for the e-taxation system which was actually designed by Inspur Zimbabwe and Zimra ICT personnel.

Inspur directly supplied the system to Zimra, with a cost of $11 819 000-00, with Righlux Services acting as an intermediary yet the work was done by personnel within the country.

The latest  appearance  of Inspur to Zimbabwean  market however had no scandals in it, neither does  it smell as one. Infact its revolutionary.

The server manufacturer has mostly managed to escape the ire of US officials, and has previously been left out of public discussions over Chinese companies with uncomfortable state ties. So far, it has avoided sanctions that would restrict its ability to use the US chips that power all of its server products.

Its site boast testimonials from senior officials at Nvidia, Cisco, Intel, and others. “Inspur is a fantastic company to work with… they’re critical to bringing the latest AI technologies to all of our customers,” data center head at Nvidia, Ian Buck, states in one of the videos

The pattern of the world’s first server camp is further consolidated. Data show that the top three Dell, HPE and Inspur shipments accounted for more than 10%, and the shipment share was 16.8%, 12.4% and 11.7%, respectively. Among them, Inspur achieved double-digit sales growth of 12.1%. In the Chinese market, Inspur has a market share of 38.7%, ranking first. 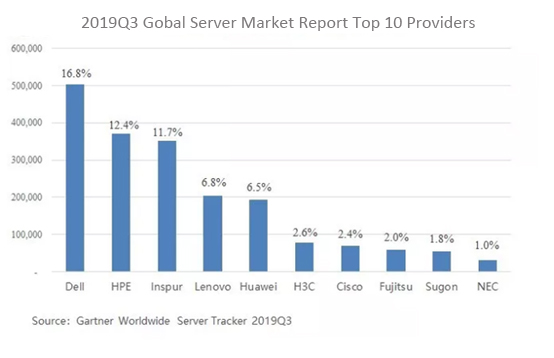 In the market of servers, there are famous global brands, such as Dell, HPE, Huawei, but the Inspur may be understated. However, now it’s the No.3 brands of producing servers in the world!

The deal, which includes reselling Cisco networking gear and jointly developing a broad spectrum of software and hardware, is part of a $10 billion China investment initiative announced by the San Jose networking giant in June.

Inspur, headquartered in Jinan, China, will have a 51 percent stake in the new venture.

#MondayBlues: Can the Zim Gvt TTMS Spy On Calls?