The Harare Institute of Technology (HIT) together with Steward Bank recently launched student identity cards with banking functionalities as part of the bank’s efforts to enhance financial inclusion. HIT is now a leading institution spearheading the total adoption of technology across all industries.

HIT becomes the second university to launch such a programme with the bank after the National University of Science and Technology (NUST) where an estimated 6 000 students have signed up for the students’ cards. The project is expected to spread to other universities and should be complete within the next six months.

The card combines a student’s bank account details and conventional student identity card offered by the tertiary institution. It means one card performs all functions of a bankcard including Point Of Sale (POS) transactions with banking details on one side, while the other side contains the normal student identity card information and can be used for all university services such fees payment, library access and buying food from the Campus Canteen. 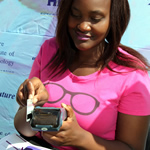 Steward Bank’s Divisional Head for Banking and Commercial Services, Mr Zvichapera Katiyo said the bank would spread to other universities across the country. He added that apart from enhancing financial inclusion, the programme would also remove the cost of producing student identity cards from universities.

“We have added banking functionalities to the conventional student ID card. Our intention is to cover all universities with this programme,” said Mr Katiyo. “This means students can enjoy convenience of banking anywhere using their student ID cards. They can perform ATM transactions or POS purchases on campus or anywhere. The card is also ZimSwitch enabled,” said Mr Katiyo.

HIT Communications and International Relations Director Mr Tinashe Mutema said students could pay their tuition fees and other transactions at the university using their cards.

The launch of the HIT Steward Bank Student Cards was held on the sidelines of the second edition of the Technovation Day and was officially graced by HIT Registrar Mrs M. Samupindi, the Institute Librarian Mr. J.L Maenzanise and the Dean of Students Mr J. Chandauka.