This is possible thanks to the bash -c command. Use it to run Linux commands via Command Prompt and PowerShell, or even create a desktop shortcut that runs a Linux command or program when launched.

How to Run Linux Commands in the Command Prompt or PowerShell

How to Install and Use the Linux Bash Shell on Windows 10
Windows 10’s Anniversary Update offers a big new feature for developers: A full, Ubuntu-based Bash shell that can run Linux software… [Read Article]

Before you do any of this, you’ll need to install and set up Windows 10’s Bash shell. After you do, you can open a Command Prompt window and  run the following command to run Linux software outside a Bash window:

For example, let’s say you wanted to install the emacs package via apt-get. You’d run the following command in a Command Prompt window:

When you use bash -c, Windows will launch a Bash shell in the background and pass the command to it. The command will run until it’s done and then quit, along with the Bash shell. Any terminal output the current command runs will appear directly in the Command Prompt window, rather than a separate Bash shell window. This trick also allows you to run Linux commands in PowerShell, just as you’d run a normal Windows executable. You can do this by directly running the .exe file as you would in a Command Prompt window, or via any other method for running executables in PowerShell.

As with a Command Prompt window, the output of the command will appear directly in PowerShell. These methods can be used to add Linux commands to a batch file or PowerShell script, too.

This trick also works for running commands from the Run dialog, Start menu, or any third-party application launcher.

For example, to launch vi from the Run dialog, you’d press Windows+R on your keyboard and then run the following command:

The vi text editor will appear in its own window. This also works for the Start menu, so you can type the same command directly into the Start menu and press Enter to run it as a command. How to Run Linux Commands with a Desktop Shortcut

You can now save the shortcut and it will launch vi when you double-click it. 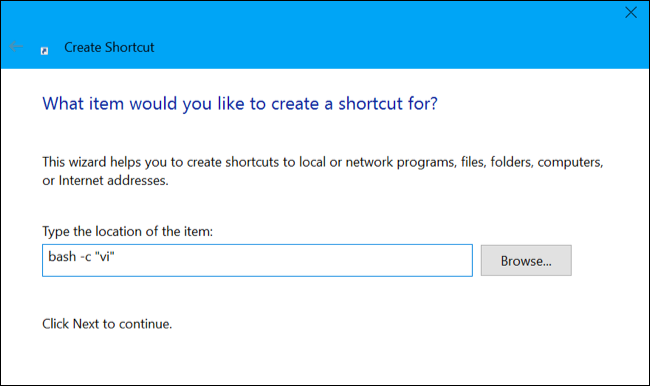 While you can launch Bash commands from elsewhere in Windows, there’s no way to run Windows software or executables directly from a Bash shell window.

#FridayHacks: How To Encrypt Your PC, Phone, and Tablet Now! You May Regret Later