Zimbabwe mainstream media has been paid off directly via cash or some through huge adverts to support and stop questioning the bond notes, #MondayBlues has learnt.

While we strongly believe that as media, TechnoMag has a role to inform, educate and question any unethical ongoing, #MondayBlues is equally disappointed to note that main stream media has given up on their moral mandate.

There seems to be overwhelming evidence to substantiate that mainstream media has been paid not just to shut up on critiquing the bond notes, but also to make headlines that project positivity towards bond notes.

While we strongly believe on patriotism and driving developmental agendas for the nation, the bond note does not stand for any of those ideals under whichever circumstance.

There is nothing as sickening like reading headlines screaming “Zimbabweans embrace bond notes,” when we all know that is not the fact on ground.

If there was a real test to whether the nation accepts the colour fading papers, then the authorities should have made available all the major currencies which are USD dollars and Rands and also introduce bond notes as well.

It is stupid and ignorant to allow any media house to run such a headline, because its not a choice when there is only one option on the table. if at all , Zimbabweans have been forced to use bond notes to transact because there is no any other currency readily available on the market.

I am sure if there were Chinese Yuan’s, Zambian Kwacha or Mozambique Meticais available these currencies would have been preferred against the bond note.

The point home is that media houses should desist from lying to the nation and stop taking the nation for granted by driving their paymasters agenda, hiding on unsubstantiated headlines.

When a Zimbabwean walks into a bank, he or she has genuine case to with draw or transact and people should be treated with respect and simply get the required services they deserve from the institutions.

When after hours of waiting, desperate Zimbabweans end up accepting the bond notes to trade, this is a sorry and dire strait which should not be published as acceptance of the currency but rather of the status quo. 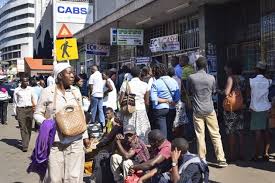 Strange enough all media houses which used to question and critic the bond note have taken a completely different stance to rally and support the surrogate currency as the best thing ever to happen to Zimbabwe, ignoring the roots of the problem.

In a see no evil, speak no evil style, the mainstream media has betrayed millions of Zimbabweans who are still a stuck up in queues with many of them literally sleeping over in town to try and get better chances of withdrawal.

Most banks by Sunday 12 midnight have queues where scores of people were literally sleeping on the streets as they try to desperately increase their chances of getting whatever they can from respective banks.

This cannot be reported as acceptance of the bond notes but a cash crisis which was created by the authorities when they could not support the empty nostro accounts with inflated local RTGS bank balances.

Plastic money will be the only easy way to get out of this situation with an increase of these POS machines around the nation., hundreds of service providers are now accepting swipe as a formal mode of payment.

#MondayBlues: Why The Zim Bond Notes Will Fail