A new ‘cyber strike force’ costing up to £500 million is being secretly built by Britain to wage war with a regiment of computer geeks instead of bombs and bullets.
Fighter planes, warships and regiments face being replaced by futuristic cyber assaults using lethal computer worms and viruses to wipe out enemy targets.
And the Army’s tough fitness tests are to be lowered to allow weedy or overweight ‘computer geniuses’ to join the new front line of ‘keyboard commandoes’. 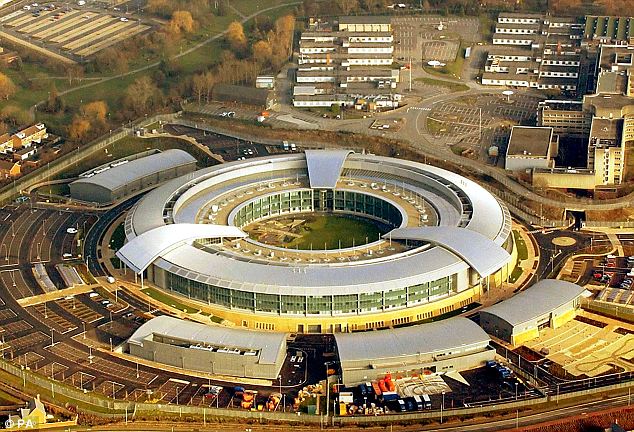 Keyboard commando: Defence Secretary Philip Hammond in the top-secret bunker beneath the Ministry of Defence, from where the cyber wars of the future will be fought and won by weedy ‘computer geniuses’
Defence Secretary Philip Hammond, who will announce the new plans at the Tory conference today, has hailed the changes as the biggest military revolution since tanks replaced cavalry brigades in the First World War a century ago.
He told The Mail on Sunday that Britain is the first nation in the world to announce publicly that it has a ‘cyber strike capability’.
And he revealed work on developing the ‘laptop army’ is already under way. Future wars would be fought by ‘IT geeks in rooms like this rather than soldiers marching down the streets, or tanks or fighter aircraft’, he said.
‘More and more, modern warfare will be about people sitting in bunkers in front of computer screens, whether remotely piloted aircraft or cyber weapons.’

More…
Ed’s the new Kinnock, says PM: Cameron mocks Miliband for ‘reciting the 1983 manifesto’ as he arrives at Tory conference

http://i.dailymail.co.uk/i/pix/2013/09/28/article-0-0236EF8900000578-744_306x520.jpg
Being snubbed by Cherie made me hide in the loo and inspired me to write memoir that shocked Westminster, Damian McBride reveals
Sam and Dave will see you now: Camerons team up to visit hospital ahead of Tory party conference where PM promises extra £400million for caner drugs
Cat flap in Number 10: The claws are out for Larry amid claims the Camerons do not like their pet
MPs give green light to online firms that spy on your personal data from mobile apps and social networks to show you targeted ads
It is believed Israel, the United States and Iran have already developed such weapons, though no country has admitted to it.
Mr Hammond said clinical ‘cyber strikes’ could disable enemy communications, nuclear and chemical weapons, planes, ships and other hardware. And, in contrast with bloody, dangerous and inaccurate bombing raids, entire cities could be conquered without a single loss of life, helping Britain to avoid a military war – and a public relations battle.
‘People think of military as land, sea and air,’ he said. ‘We long ago recognised a fourth domain – space. Now there’s a fifth – cyber.

‘This is the new frontier of defence. For years, we have been building a defensive capability to protect ourselves against these cyber attacks. That is no longer enough.
‘You deter people by having an offensive capability. We will build in Britain a cyber strike capability so we can strike back in cyber space against enemies who attack us, putting cyber alongside land, sea, air and space as a mainstream military activity. Our commanders can use cyber weapons alongside conventional weapons in future conflicts.’
http://i.dailymail.co.uk/i/pix/2013/09/28/article-0-185B4A5F00000578-945_634x578.jpg
Britain already has a defensive cyber military force to fend off cyber attacks by terrorists and others. It will now develop an attack force in conjunction with GCHQ spy chiefs.
Mr Hammond admitted this expansion is already under way.

GCHQ Headquarters: The controversial signals intelligence agency is to help develop Hammond’s cyber attack force
The significance of the announcement was underlined by his decision to deliver it in an interview with this newspaper conducted in the Ministry of Defence’s vast Pindar nuclear bunker, or ‘Current Contingencies Task Room,’ situated way below Whitehall.
It is the first time any Defence Secretary has been photographed or interviewed there.
Appropriately for a quantum leap in the Armed Forces, the bunker is crammed with modern technology, including the ability to take over Britain’s entire communications network.
More than 100 top politicians, generals and others will live in the bunker, built on the orders of Margaret Thatcher in the Eighties, in the event of nuclear war, a chemical weapons onslaught or other major attack.
The Prime Minister is the only person provided with a bunker for his wife and children – so their welfare does not affect his judgment in deciding whether to press the nuclear button.

The new face of British special forces: A new ‘Cyber National Guard’ will be open to whizzkids who cannot pass Territorial Army fitness tests. (Stock image)
The room is named after Greek lyric poet, Pindar. When Alexander the Great devastated Thebes in 335 BC, he spared the house of Pindar.
http://i.dailymail.co.uk/i/pix/2013/09/28/article-0-1A357490000005DC-987_634x432.jpg
Mr Hammond says Britain will spend ‘hundreds of millions of pounds’ on the new strike force.
The Mail on Sunday understands the figure could be as high as £500 million in the next few years.
It will change the appearance of the Army in more ways than one. A new ‘Cyber National Guard’ of part-time reservists will be open to computer whizzkids who cannot pass the current Territorial Army fitness tests, on the basis that press-ups do not aid computer skills. ‘A TA for computer geniuses’, as Mr Hammond called it.
He poured scorn on ‘crude and bonkers attacks by armchair generals’ who have criticised him for cutting the number of soldiers – and made it clear conventional forces faced more cuts in the switch.
‘Military capability doesn’t stand still. You cannot fossilise it.
‘As much as we love and cherish our military traditions, the defence of the nation means we must spend money on the capabilities of tomorrow, not yesterday.
‘I’m sure a healthy debate raged 100 years ago about whether to invest in new-fangled tanks and stop buying hay for the horses. Some will have said, “Buy more hay, not tanks.”
‘Those who think they are defending our military capability by defending the shape of the military of last year or the last decade aren’t defending it at all.’
http://i.dailymail.co.uk/i/pix/2013/09/29/article-2436946-1980A399000005DC-641_634x424.jpg
He spelled out the advantages of cyber warfare: ‘Years ago, you’d go into a target area and bomb it with freefall bombs. Western public opinion increasingly demands precision attack – no civilian casualties, no collateral damage.
‘Cyber weapons provide the tantalising possibility of being able to cripple the enemy without inflicting lasting damage on them.
‘No cities to rebuild, no infrastructure to reconstruct. One of my American counterparts put it to me like this: “Why would you want to bomb someone’s airfield if you could just switch it off with a cyber attack?” ’
Enlarge
It will mean further cuts in soldiers, airmen, sailors, tanks, ships, fighter planes and more – though Mr Hammond refused to say where the axe will fall.
‘We only have one pot of money and if we going to invest hundreds of millions of pounds in cyber capabilities, we have to stop doing something else.
‘That is the tough message. As our cyber capability builds, we will look at how the military would be likely to use it and where that allows us to reduce other capabilities.
‘Where we can tackle a target with cyber weapons, we may need fewer conventional weapons in that area but I can’t say yet where those areas will be. It will be a constant evolution.
‘The trigger of the gun, bomb or missile will always have a role but as the world becomes more dependent on IT systems, one way of delivering incapacitating blow to the enemy will be by delivering a blow to his IT systems.’

Facing further cuts: Hammond admitted that the funds for his cyber army would lead to less for other forces

Unlike soldiers marching in the street, the Armed Forces’ computer geeks would be invisible, but no less effective, said Mr Hammond, clearly worried that the move may be seen as an attempt to conceal cuts in conventional weapons.
However, he added: ‘A man with a rifle is not state-of-the-art modern warfare.
‘A modern infantryman has more firepower than an entire platoon in Wellington’s army at Waterloo.’
The cyber strike force was a further leap forward, he stressed. ‘Looking at nations in terms of how many servicemen and women they have is completely bonkers.
‘It would tell you North Korea is second most powerful nation on earth after China, and the US about number ten.’

What Programmers Love About Writing Code?