France Telecom-Orange and the other members of the Africa Coast to Europe (ACE) consortium announced in a ceremony held today in Banjul, The Gambia, that the ACE submarine cable is now operational for the first phase linking France and Sao Tomé & Principe.

The cable, which will extend as far as South Africa for the second phase, provides connectivity to broadband internet in Africa and will add extra capacity to existing international networks. 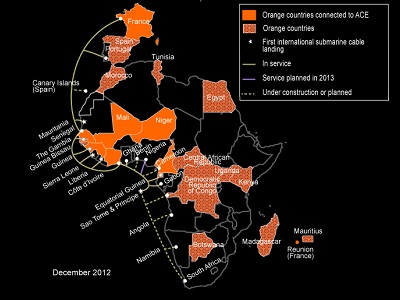 Seven of these countries – The Gambia, Guinea, Equatorial Guinea, Liberia, Mauritania, Sao Tomé & Principe and Sierra Leone – will benefit for the first time from a direct connection to a submarine cable enabling them to enjoy optimal access to the international broadband network. By using this new network, the telecoms operators in these countries will now be able to develop innovative broadband services that are essential to their economic and social development.

The ACE cable will also contribute to the development of multinational companies present in Africa by improving connectivity between the local subsidiaries and their global networks. This will allow them to develop added-value services in areas such as Unified Communications, IT and customer relations.

The commissioning of this first phase marks the beginning of the deployment plan for the ACE submarine cable, which will ultimately run for a total of approximately 17,000 km. Seven additional countries will be connected in the second phase.

To carry out this ambitious project, France Telecom-Orange, together with its subsidiaries Côte d’Ivoire Telecom, Orange Cameroon, Orange Mali, Orange Niger and Sonatel, have combined forces with other major partners to form an international consortium.

Through links to other submarine cables, ACE also provides an additional western route for traffic between Europe and Asia via Africa. ACE, for example, offers an alternative and secure route for communications to countries already connected to the SAT3-WASC-SAFE cable linking Portugal and Malaysia. Finally, the cable also diversifies transmission arteries between Portugal and France.

ACE relies on what is currently the most advanced technology used for submarine cables: wavelength division multiplexing (WDM). With WDM, cable capacity can be increased without additional submarine work. Overall capacity will be boosted to 5.12 Tbps using the new 40 Gbps technology which supports ultra-high speed broadband networks.

An essential part of the Group’s broadband network in Africa

The cable’s construction amounts to a total investment of around USD 700 million for the consortium, with around USD 250 million financed by the Group and its subsidiaries. This major investment furthers two strategic objectives of France Telecom-Orange: to provide widespread access to the internet in the more than twenty African countries where the Group is present and to continue to improve the quality of service provided by the network in all of its subsidiaries.

Through the development of its submarine networks, France Telecom-Orange is contributing to the development of a high quality worldwide network. These cables constitute the essential arteries to provide the Group with access to high-performance systems at a reasonable cost in order to help service the ever increasing volumes of data being exchanged.

PC Joke Of The Day- Computers and Aircons